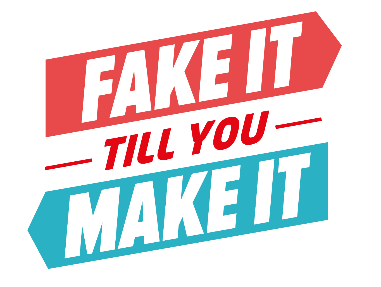 Too often when we go to church on Sunday mornings we find ourselves putting on more than nice clothes and make up. So often, we as a people like to put on the “Good Christian” suit so everyone around us thinks we have it together, walking the good walk of faith. Yet, too often, we are frustrated, hurting, beat up by life, one sideways-glance away from calling it quits.

Simply put, we fake it, hoping we’ll make it. This is a popular belief, both in and outside the body of Christ. “Pretend to have success until you actually do.” But this ignores the heart of the problem at hand and will lead to absolute failure!

The problem is simpler to state than it is to understand, thus, many have given up on the idea altogether. Sin… we have a sin problem within us. No, this isn’t a basic gospel message to lost people, though they may find it helpful. This is a message to the saved saints of the Most High God.

Sin, the Greek word “hamartia” is often described as an archery term meaning “to miss the mark.” I like that in some applications because it seems to show that we have tried hard to aim well but circumstances, whether inside us or outside us, have caused us to twitch at just the wrong moment; the moment we released the arrow to fly to the target.

This doesn’t always describe the idea of sin in our lives. There is another idea within the Greek word we translate into sin. It’s the idea of trespassing. In fact, this is the English word often translated from its root, “hamartano”. We read a related word, “paraptomah” in the Lord’s Prayer where Jesus uses it as an idea of what we would understand as sin. To trespass is to be in a place at a time where we have been warned not to be and have no business being there.

This better defines the idea of sin. We’ve been warned where it is. We’ve been told that the place is dangerous. Yet we’ve made intentional decisions to enter upon the property against the warnings and now have to reap the consequences of our deliberate actions.

With that understanding of sin in place, lets understand where it fits in the believers’ life.

You struggle with sin but believe you’re a failure because of it. So, you struggle alone. Not convinced? Let’s hear from the Apostle John on the matter:

This is the message we have heard from him and proclaim to you, that God is light, and in him is no darkness at all. If we say we have fellowship with him while we walk in darkness, we lie and do not practice the truth. But if we walk in the light, as he is in the light, we have fellowship with one another, and the blood of Jesus his Son cleanses us from all sin. If we say we have no sin, we deceive ourselves, and the truth is not in us. If we confess our sins, he is faithful and just to forgive us our sins and to cleanse us from all unrighteousness. If we say we have not sinned, we make him a liar, and his word is not in us. (1 John 1:5-10)

Interesting how John puts it. He uses language that’s both present tense and inclusive. Two things to walk away with:

Clean but not immune

To the first point. Have you ever found yourself on the other side of a failure and thought, “Why haven’t I conquered this?” “Didn’t I give this to Jesus?” “Am I really even a Christian?” “Am I really saved?”

Those are tough questions that come out of a tough season of life. What’s worse than being there, is the product of such a season. This sense of failure, often left to fester under the surface, will lead us down some dark roads in our faith-journey.

It isolates us in the areas we need community the most! Our struggles in life are not best fought in the shadows by ourselves but surrounded by a strong faith community. Listen to the writer of Hebrews on this:

Let us hold tightly without wavering to the hope we affirm, for God can be trusted to keep his promise. Let us think of ways to motivate one another to acts of love and good works. And let us not neglect our meeting together, as some people do, but encourage one another, especially now that the day of his return is drawing near. (Hebrews 10:23-25)

Many may think, “Yeah, right. The moment I bring this to light, others will judge me.” True! Those weak in faith and in similar situations will be the first to cast stones. But true, compassionate followers of Jesus will come around you in and undergird you. In such a community you’ll learn to conquer the sin that entangles you.

Maturity in Christ is not absent sin.

To the second point. I want to focus on HOW John writes. He uses language to cause the reader to see how he’s also in this category with the people he is writing to. John’s owning sin. He’s not above reproach. He’s not above the stain of sin. Even in the decades of leading and teaching, John believes himself to fit snuggly along side those who have need to confess their sins.

Just to be clear, John is not writing a letter to those who haven’t heard of salvation through Jesus (cf. 1 Jn. 2:7-14). No, he’s writing such things to believers, which changes the calculus a bit.

Yes, that’s a quick jump, so let me explain. As stated in the earlier point, often times we fail to confront sin properly, leading down paths destructive to our faith. Instead of fighting the sin in community, we relegate it to the shadows of our lives and eventually justify it as “simply who I am.”

Didn’t I just say that sin IS “who we are?” Isn’t that what John is writing? Yes and no… Sin is part of the fabric of our lives, yet we’ve been set free from the eternal consequences, as well as the strangle hold. However, this freedom is only realized when we deal with it according to the Scriptures. If this wasn’t the case, then why in the world is the entirety of the New Testament even in existence? Is it not a measuring line for what following Christ looks like?

There’s a fine line between struggling against sin and embracing it. That line is clearest when we hold our actions up to the light of God. This is exactly what John is getting at. We won’t fight the sin if we are keeping it pent up in dark places, out of sight of the rest of the community.

We may try to fight it, but won’t really yield to God’s power. We’ll slowly and surely begin to embrace the sin as “not that bad”, then maybe its really “just ok”, then the slope steepens to “it’s a normal thing” and the cliff, “this is actually good for me.”

Listen to what the writer of Hebrews says next after he encourages us to stay in community:

Dear friends, if we deliberately continue sinning after we have received knowledge of the truth, there is no longer any sacrifice that will cover these sins. There is only the terrible expectation of God’s judgment and the raging fire that will consume his enemies. For anyone who refused to obey the law of Moses was put to death without mercy on the testimony of two or three witnesses. Just think how much worse the punishment will be for those who have trampled on the Son of God, and have treated the blood of the covenant, which made us holy, as if it were common and unholy, and have insulted and disdained the Holy Spirit who brings God’s mercy to us. (Hebrews 10:26-29)

That says a lot that we should take in, sooner rather than later. For now, let’s focus on the idea of “deliberate”. This is more than a moment of failure. This is a calculated action of sinning. This is a moment of “in your face God!” Yet, it can sound as simple as, “me and God, we have an understanding.” Or, “this is just how God made me, so get used to it.” I’ve heard such things said many times in many ways, all are deliberate attempts to justify sin rather than holding it to the light and fighting it!

John says that light and darkness have no fellowship. He says this to a people who have accepted salvation in Jesus. He includes himself into such a category. Yet, our Creator God, through John, His Apostle, encourages and warns us. He encourages us in the sense that we all have sin, so let’s work it out together. And warns us against ignoring our sin to the detriment of our eternal life.